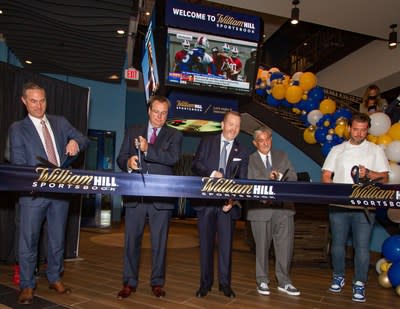 William Hill, a part of Caesars Entertainment, and Monumental Sports & Entertainment announced a groundbreaking partnership deal in October 2019 to open the first-of-its-kind, marquee destination for local, regional and global visitors. With the addition of Michelin-starred Chef and Maryland native Nicholas Stefanelli, the talents of three leading purveyors in the hospitality and entertainment industries will offer guests a truly unique and extraordinary experience.

“Monumental Sports & Entertainment is proud to have worked with William Hill and Caesars Entertainment, a proven leader and innovator in sports betting, to provide the preeminent fan experience and serve as exemplars to the industry as first-in-class and best-in-class,” said Monumental Sports & Entertainment Founder & CEO Ted Leonsis. “Providing a data-driven, technologically-advanced environment in a beautiful, approachable space with fine dining options provided by Chef Stefanelli will further enhance the indelible memories we create nightly at Capital One Arena, and draw even more visitors to our historic downtown D.C. neighborhood.”

The two-story, 18,000 square-foot venue features 17 betting windows and 12 self-service betting kiosks, as well as Verizon 5G Wi-Fi capability so fans can place wagers on mobile devices through the William Hill app from the comfort of their seats as they enjoy a meal or beverage. Visitors will enjoy a premium game-day experience whether they’re attending a Capitals or Wizards game or watching out-of-town games in the sportsbook, thanks to an inspired sports-bar menu crafted by Stefanelli.

More than 100 television screens adorn the Sportsbook, including four positioned on all sides of a jumbotron that hangs from the ceiling in the center of the venue that is a replica of the one inside Capital One Arena at center ice/center court. A custom, 1,500 square-foot LED screen wraps the entire facility and offers visitors the best viewing experience for enjoying multiple games across various sports simultaneously.

There is also a broadcast studio that will be used to host live television and radio shows, as well as two VIP areas and a private dining and entertainment space. Design elements pay homage to the history of sports and local professional teams, including baseball stitching incorporated into the staircase railing, vintage lockers featured in the main bar, local sports memorabilia throughout the space and sketches of local arenas printed on the ceiling.

The sportsbook and restaurant will be open daily, year-round, and are accessible to the public from F Street while offering direct access to and from Capital One Arena during select ticketed events, which currently number 230 events a year and welcomes 3 million visitors.

“With more than 100 televisions, nearly 20 betting windows and a dozen kiosks in the space as well as access to the William Hill mobile app, our guests will enjoy a great gameday watching the Capitals or Wizards at home or wagering on their favorite teams during any game,” said Tom Reeg, CEO of Caesars Entertainment, parent company of William Hill. “Adding Chef Nicholas to our roster has elevated our partnership with Monumental Sports & Entertainment to an elite level, providing the ultimate sportsbook experience for fans throughout the region.”

The premier full-service food and beverage offerings created by Stefanelli complement the premium sports betting facilities that are synonymous with the William Hill experience. With its location within the spirited and energetic atmosphere of Capital One Arena, the William Hill Sportsbook and Restaurant Concept offers a revolutionary and fundamental fan experience for sports fans in Washington, D.C.

Stefanelli is known for his traditionally inspired Italian dishes mixed with equal parts finesse, flavor and whimsy style at his flagship Michelin-starred restaurant Masseria, as well as Officina at the Wharf and Georgetown.

“Having the opportunity to partner with industry leaders William Hill and Monumental Sports & Entertainment to present this Sportsbook and Restaurant Concept in D.C. is very exciting,” said Stefanelli. “Bringing my brand of hospitality to sports and gaming is a winning combination for me.”

About Monumental Sports & Entertainment
Monumental Sports & Entertainment is America’s leading sports and entertainment family. Our people, players, teams, and events bring excitement and joy to millions. We invest and innovate to consistently raise the game so we can deliver extraordinary experiences that will inspire and unite our community, our fans, and our people. To learn more, please visit www.monumentalsports.com.

About Chef Nicholas Stefanelli
Nicholas Stefanelli is the award-winning chef and owner of Masseria and Officina in Washington, DC. Stefanelli grew up in suburban Maryland with a strong influence coming from his close relationship to his Greek and Italian grandparents whose culinary heritage was a fact of life. Visiting Puglia, the source of his Italian roots, Stefanelli became enchanted by the masseria, centuries-old agricultural estates whose residents worked the land, created their own food, and hosted visitors, neighbors, and friends with great warmth. Striking out on his own and building his culinary career in the Nation’s Capital, Stefanelli was determined to recreate that sensibility in his first establishment, Masseria, which in 2016 earned a star in Washington, DC’s, first-ever Michelin Guide, an honor it has received every year since. Stefanelli opened Officina at The Wharf as a culinary playground bringing together the best of Italian gastronomy, shopping, dining, and home cooking together under one roof at the flagship Wharf location and neighborhood Georgetown address and soon-to-open downtown DC together with his modern Greek concept, Philotimo.

The Indiana Pacers (33-38) and Toronto Raptors (27-44) wrap up the regular season Sunday at Amalie Arena in Tampa, Fla. Tip-off is set for 1 p.m. ET. Below, we analyze the Pacers vs. Raptors odds and lines, with NBA picks and predictions. The Pacers are in a three-way tie for eighth place with the Charlotte…

Access to this page has been denied because we believe you are using automation tools to browse the website. This may happen as a result of the following: Javascript is disabled or blocked by an extension (ad blockers for example) Your browser does not support cookies Please make sure that Javascript and cookies are enabled…