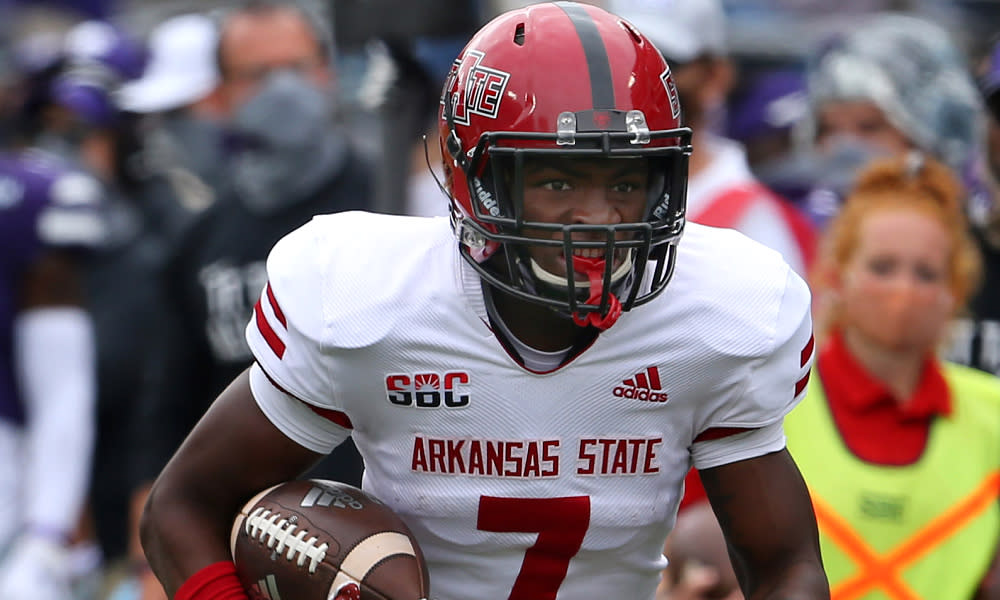 College Football News Preview 2021: Previewing, predicting, and looking ahead to the Arkansas State football season with what you need to know.

– New head coach Butch Jones has been a huge help right off the gate – the talent is coming in through the transfer portal. The Red Wolves were already solid offensively – they led the Sun Belt in total offense but were fifth in scoring, averaging 490 yards and 33 points per game – so there’s not too much of a need to mess with what worked. Offensive coordinator Keith Heckenforf is still around.

– Logan Bonner and Layne Hatcher have been part of a strong quarterback rotation, but Bonner followed former head man Blake Anderson over to Utah State. In comes former Florida State starter James Blackman to at least be part of the mix and a rotation, but Hatcher could be too good to push out coming off a 19 touchdown, two pick season. Neither one adds much to the ground game.

The receiving corps loses leading receiver Jonathan Adams and second-leading target Brandon Bowling – he took off for Utah State – but this should be the team’s biggest strength with a ton of talent in place and several options coming in from the transfer portal.

Dahu Green was second on the team in receiving yards despite missing half the season and 6-2 sophomore Corey Rucker is a rising star who averaged over 28 yards per grab. The tight ends get plenty of work – Reed Tyler should be good for close to 30 grabs.

– Leading rusher Jamal Jones is done, but there are a whole lot of running backs to choose from. Lincoln Pare and 2019 leading rusher Marcel Murray combined for over 600 yards – Pare did most of the work with 450 of the yards – and Iowa State’s Johnnie Lang and former Yale all-star Alan Lamar should be an instant factor.

Left tackle Jarrett Horst left for Michigan State, but the other four starters are back up front to a line that struggled against the run but was okay at keeping defenses out of the backfield.

– What You Need To Know: Defense
– Top Players | Keys To The Season
– What Will Happen, Win Total Prediction
– Arkansas State Football Schedule

– The offense will be more than fine. The defense is where things need to pick up after having a nightmare of a time against decent passing teams – allowing 314 yards per game – and finishing second-to-last overall in the Sun Belt. Start with …

– The defensive line. It was great at getting into the backfield and statistically it wasn’t too bad against the run, but that’s partly because everyone spent so much time bombing away.

The end pair of TW Ayers and Terry Hampton return – the 293-pound Hampton is really a tackle – and here’s where the reinforcements will really help. Pass rusher Kivon Bennett and tackle John Mincey are coming in from Tennessee, and Quay Mays is coming over from West Virginia.

– Losing top tackler and all-star LB Justin Rice to Utah State hurts. He was the main man for the defense, and now it’s up to Jeffmario Brown and CJ Harris to use their athleticism and experience to be more disruptive. The incoming linebacker transfers aren’t as strong as they are for the defensive line, but at least there are more options.

– The secondary might have been awful, but at least it’s experienced with all four starters expected back. CB Samy Johnson and S Antonio Fletcher each picked off two passes, and veteran Eley Alexander was second on the team with 54 stops.

– What You Need To Know: Offense
– Top Players | Keys To The Season
– What Will Happen, Win Total Prediction
– Arkansas State Football Schedule

WR Corey Rucker, Soph.
Let’s just say the Best Offensive Player thing is fluid. It depends on how the transfers work into the mix and if someone rises up and takes the quarterback job and locks it down. No matter what, though, the 6-2, 190-pound Rucker is going to be a factor.

It’s a projection, but Rucker has the look of the next ASU receiver star.

He only played in eight games as a freshman but he exploded for 453 yards and five scores on just 16 catches – he averaged over 28 yards per catch. Almost all the production came in a nine-grab, 310-yard, four-score day against ULM, but get ready for a whole lot more.

LB/DE Kivon Bennett, Jr.
Just as the son of former NFL star Cornelius Bennett appeared to be on the verge of big things at Tennessee, he was arrested on gun and drug charges after a traffic stop and was dismissed from the team.

QB James Blackman, Sr.
Former Tennessee Vol pass rusher Kivon Bennett should be the best of the transfers, and there are a slew of others who’ll make an impact, but Blackman is the most intriguing of the new guys into the mix.

Layne Hatcher is a terrific returning starter, but ASU rotates its quarterbacks. The 6-5 Blackman has a good arm and a ton of experience with 46 touchdown passes and close to 5,500 yards in his four seasons at Florida State, and he’s a strong leader who should step right into a role in some way.

– What You Need To Know: Offense | Defense
– Keys To The Season
– What Will Happen, Win Total Prediction
– Arkansas State Football Schedule

Put the biscuit in the basket. Arkansas State didn’t have any problems moving the ball – it led the Sun Belt and was 14th in the nation in total offense – but it had a hard time finishing off the drives with points.

Turnovers were a bit of an issue, but scoring in the red zone was just as big a problem. The Red Wolves scored just 78% of the time when getting inside the 20. For a team that played five games decided by a touchdown or less, everything matters.

The pass defense needs to show up. The experience is there in the secondary, and the pass rush should be better under the new coaching staff and with the talent coming in from the transfer portal, and now there has to be an occasional stop.

The Red Wolves were ripped to shreds for 314 passing yards per game, allowing 33 touchdowns on the season with just six picks – and two of those came against Central Arkansas from the FCS.

Everyone threw for more than 200 yards against the ASU D, making it a run of 13 straight games going back to 2019 doing that.

DT Quay Mays, Sr.
The 6-1, 300-pounder didn’t do a whole lot in his time at West Virginia – he made four tackles last year – but he was considered a strong JUCO transfer who was a nice interior pass rusher and active presence for Mississippi CC. Now he needs to help bring the bulk to the ASU line.

338-pound Forrest Merrill was a good one on the nose – making 42 tackles with two sacks and 6.5 tackles for loss – but he’s gone to the NFL and now there’s not a whole lot of size for the spot. Mays has to at least be a key part of the rotation.

Louisiana, Oct. 21
The Sun Belt West is far, far lighter than the East, but the Red Wolves have to deal with everyone but Troy on the other side. On the plus side, the dates with Coastal Carolina and Appalachian State are at home.

The Red Wolves get a week off before the showdown, and Louisiana – who has won three straight in the series – has to play Appalachian State the week before.

Arkansas State might have pulled off one of the better coaching hires in the last cycle.

It’s not like Tennessee lit it up after firing Butch Jones.

Granted, his Vols were 0-6 to start the 2017 SEC season and things were trending down with a few off-the-field issues to go along with the problems on it, but he won 34 games in his five seasons and went 3-for-3 in the bowls, and since he was canned the program has gone 15-22 and now has a new coach.

Jones spent the last three years as part of the Alabama juggernaut, finding a role on the staff as an offensive assistant, and now he’s getting another shot at a head coaching gig.

He won two MAC championships at Central Michigan, two Big East titles at Cincinnati, and now he’s getting a program that’s used to being in the mix for conference championships.

He can do big things right away.

Arkansas State is doing this in reverse. From Gus Malzahn, Hugh Freeze, Bryan Harsin and now Blake Anderson – who left to take the open job at Utah State – coaches have used ASU as stepping-stone to something else.

Jones might be back in the Power Five world with a little success in Jonesboro, but first he has to get the Red Wolves back in the Sun Belt title hunt.

The offense is going to be fantastic, the defense can’t help but be better with eight returning starters and a slew of good transfers, but the schedule in an improved Sun Belt is a big, big issue.

Memphis, at Washington, at Tulsa, at Georgia Southern. After starting against Central Arkansas, that’s the start of the season – and then the schedule gets difficult.

Coastal Carolina, Louisiana and Appalachian State all have to come to ASU, but all of them are loaded.

The Red Wolves should have the firepower to keep up with the better teams, but they should have the experience, the talent, and now the coaching to at least get back to a winning record and bowl appearance.

Each state or province determines its own minimum age for casino gambling, however Native American casinos are exempt from state jurisdiction and can lower the minimum age to 18 under the Federal Indian Gaming and Regulatory Act. Some states have 2 minimum ages (18 in some tribal casinos, 21 in others). This is typical in…

Dustin Schutte | 26 days ago https://bucket1.mm-syringe.com/prod/configs/cfc99d16-afee-2aa1-1a4d-f99899ac31e6.jshttps://bucket1.mm-syringe.com/prod/injector/injector.1.5.2.jsNebraska took the nation’s top-ranked team down to the wire, but Arkansas’ big 8th inning proved to be the difference on Monday night. The Huskers dropped a 6-2 contest to the Razorbacks on Monday night, ending their season in the NCAA Baseball Regionals. Monday’s game was a winner-take-all bout…