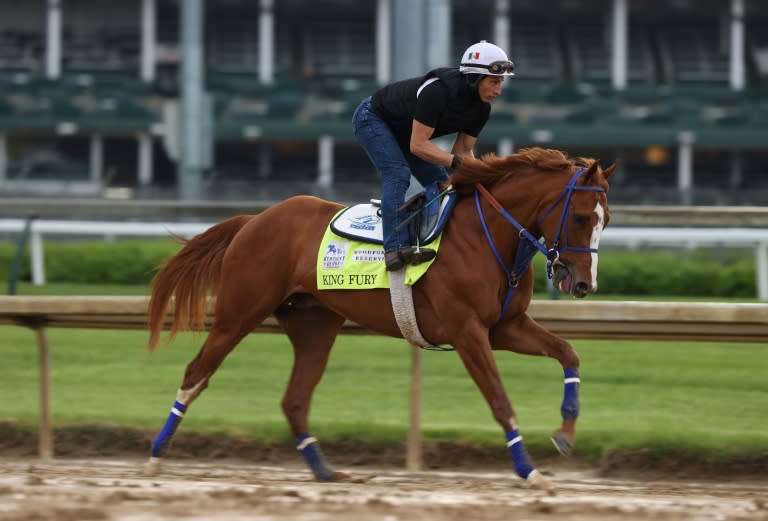 Kenny McPeek, King Fury’s trainer, said in a Twitter posting the horse had an elevated white blood cell count and in an attached video said the horse was not eating.

“King Fury is going to be scratched for tomorrow @KentuckyDerby,” McPeek wrote. “Spiked a high fever this afternoon & white count elevated. I’m disappointed for all those involved, obviously the right thing.”

The chestnut colt was named for boxer Fury, the British fighter who holds the World Boxing Council heavyweight crown.

“King Fury spiked a 104 (F) fever this afternoon after he galloped this morning, went off his feed. We obviously have to do the right thing. I feel gutted,” McPeek said. “Unfortunately, he’s not 100%.

“This is a horse that had been doing really well all week. Anybody that watched him train had to be impressed. I know I was and I felt pretty confident going into this race that we had a big chance.

“We’re obviously going to scratch him on veterinary advice, which is an easy one, take him out.

“We’ll rebound and keep at it. King Fury will be fine. Unfortunately he’s not going to be able to run.”

The Derby at Churchill Downs in Louisville, Kentucky, is the first of the US flat racing Triple Crown series that also includes the Preakness in two weeks at Pimlico in Baltimore and June’s Belmont Stakes in New York.

McPeek said he would likely plan on King Fury running again at the Travers Stakes in August at Saratoga.

“We’ll regroup and point him towards another race,” McPeek said. “I think you’ll probably see this horse pointed toward the Travers, which I think is a great spot.”

The 147th running of the Kentucky Derby is ready to take place Saturday back on its usual slot, the first Saturday of May. Twenty horses are in the field and though one horse stands out, that doesn’t mean that is who will win. Here is a look at horses that offer value. By now, even those…

The Connecticut Sun (12-5) play the second game of a two-game set against the Indiana Fever (1-16) Saturday. Tip-off at Indiana Farmers Coliseum is scheduled for 1 p.m. ET. Below, we analyze the Sun vs. Fever odds and lines, with WNBA picks and predictions. The Sun posted an 86-80 win in the front end of…