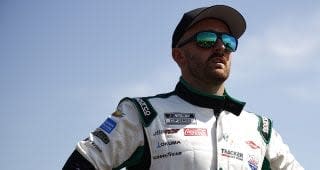 This article is brought to you by BetMGM.

With Daytona ahead next weekend, this weekend‘s FireKeepers Casino 400 race in Michigan is the last regular-season track visit where competitors can truly control their own destinies. While Daytona is a massive fan favorite, when it comes to NASCAR racing, drivers know they can‘t count on success.

They‘re not in control of anything at Daytona. So Michigan is the last stop that guarantees a driver and a good car could wrap things with a smile on the face.

So what‘s going to happen, and who might lock themselves into the playoff field? We discuss it below:

Like most of his opponents, Larson has been leaving other drivers in his rearview mirror. Yes, pun fully intended.

But this past week? Larson leap-frogged Denny Hamlin in the NASCAR Cup Series standings, straight up. Not just because he has more wins heading into the pivotal final month but because he actually has outscored the NASCAR veteran of the Cup Series.

Larson now stands atop the standings and seemingly can win anywhere. He‘s a big-time threat to win every weekend. He‘s a perfect driver to lead things off with this weekend, and the NASCAR racing odds reflect it.

During his young career, this year‘s points leader has started 12 Cup Series races at Michigan with five top-five finishes. He has three wins.

We‘re not sure any NASCAR driver would deny that batting one out of four for wins-to-starts as a ratio is a great deal.

OTHERS: Kyle Busch (+650) is Kyle Busch. He‘s always a threat. With 32 career starts here and 14 top-10 finishes, he understandably is a serious candidate to win. Sounds like a broken record? He‘s won here before, has nine top-five finishes … you name it. He‘s good. Thus his status.

With 59 career Cup Series wins, 102 Xfinity wins and 62 Camping World Truck Series victories — he‘s proven he can do anything, anywhere.

Harvick‘s the most dominant Cup Series driver of the current field when it comes to Michigan. He‘s won five races in 40 career starts and has 21 top-10 finishes. Larson, Joey Logano, and Kurt Busch have won three apiece — but Harvick is the best here.

Two things put him in this slot: He‘s traditionally strong at Michigan, and aside from Phoenix (nine career wins), one could make the argument this is his second-best NASCAR track when it comes to the Cup Series.

Secondly? He‘s hungry to make this postseason field after the final two regular-season races. If he posts a win this weekend at one of his top tracks, he doesn‘t have to sweat Daytona.

Harvick knows how to navigate Michigan. Will this one lock him into the NASCAR Cup Series Playoff mix?

You might be scratching your head when it comes to Dillon occupying this spot, but don‘t scratch too long. Dillon is not too shabby at Michigan. While his strongest venues are the restrictor-plate tracks and places like Darlington and Homestead — there‘s no question there‘s a connection with Michigan, results-wise.

He‘s decent here (16.4 average finish). He has won here in the Xfinity Series. The idea he could challenge for success this weekend isn‘t far-fetched.

Dead Heat Rules in Golf Betting: What to Know, Examples, And How Each U.S. Book Handles Them

The term dead heat — when two participants finish exactly even — got its name from racing. But it comes up far more often in golf betting. A dead heat refers to ties in finishing position bets like Top 5’s, Top 10’s and Top 20’s, plus others like first-round leader bets. When tied, your stake…

I have had nothing but problems since I joined. I made my first deposit of $25, but the app placed me in Michigan while I was located in Pennsylvania. Contacted support, took 3 separate conversations, and they said they would delete my Michigan account, and refund the $25 since they couldn’t transfer it to my…