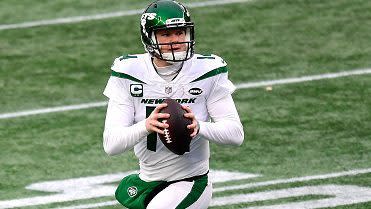 When Sam Darnold entered the NFL as the third overall pick of the 2018 draft, he was attached to expectations that he would develop into the franchise quarterback that the Jets have been trying to find for four decades.

Injuries, illness, coaching changes, lackluster drafts, ineffective play and assorted other calamities kept Darnold from reaching that level and led to the trade that sent him to the Panthers ahead of this year’s draft. Moving on from the Jets would seem to take a burden off of Darnold’s back, but he said on Tuesday that his expectations for himself haven’t shifted.

“It depends on how you see it,” Darnold said, via Darin Gantt of the team’s website. “I’ve always had high expectations for myself, first and foremost. Expectations outside of that, to be honest, besides my teammates and my coaches, it doesn’t mean a whole lot. I think for me, it’s about what we expect as a team, what we expect to win, and for me, it’s about completing the ball and getting the team down the field and scoring touchdowns. That’s all I care about. As long as we do that and I do my job, we’re all good.”

Darnold said that it has been “a seamless transition” to his new team thus far. Bumps in the road are likely to come, but the hope in Carolina is that a stronger supporting cast and the experience Darnold gained with the Jets will lead to better results in his fourth NFL season.

Sam Darnold on less pressure in Carolina: Depends on how you see it originally appeared on Pro Football Talk

Draft Kings’ sportsbook released some college football futures this week and has NC State’s over/under win total set at six, which seems … pessimistic. Or a good money-making opportunity, I suppose, if you’re the betting type. Granted, they do have State hitting that over at -139, versus going under at +110, which is to say…

How Will No. 1 Recruit Chet Holmgren Fare at Gonzaga?

Chet Holmgren . Stephen Maturen/Getty Images/AFP Gonzaga has high hopes in 2022. How will new recruit Chet Holmgren do with the Bulldogs? When you think of Gonzaga, you assume that they develop talent over the course of four years until they are seasoned seniors who lead the team deep in the NCAA Tournament. Recently, they’ve…

North Carolina Courage defeated Racing Louisville FC 5-0 during a rainy affair in Cary, North Carolina. The Courage broke through early with an opening goal from Abby Erceg in the seventh minute before recording four more goals during the second half as Debinha, Lynn Williams, and Hallie Mace turned the match into a blowout. The…